The Story of Connecticut Women through the Centuries

“During the late 1700’s and into the early years of the 1800’s, while many of our Congregational and German Reformed ancestors were trying to formalize and refine their established church order in the new nation (with little room for female leadership), the “Christians” saw church in totally new ways. They rejected formal credentials related to religious leadership, sometimes even ordination itself.  They strongly affirmed the work of women in ministry, whom they called “female laborers.” 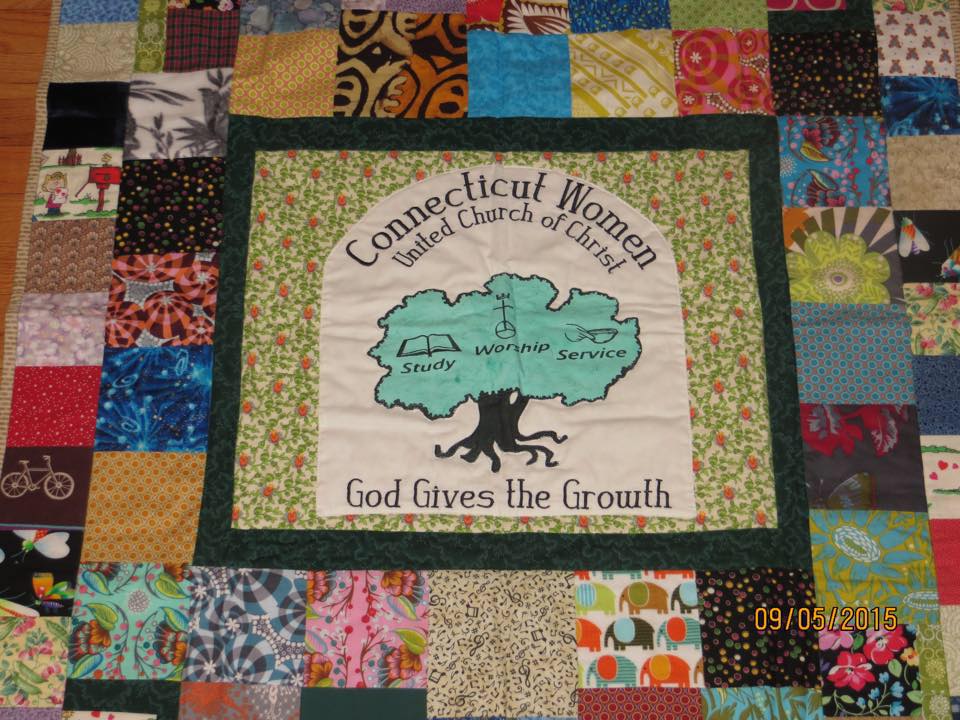 1637 ~ Ann Hutchinson, age 37, was tried before a Boston church and excommunicated for “traducing” (=slandering) the ministers for not allowing women’s voices to be heard after she dared to have “tea” with the ladies on Tuesday to “discuss” the Sunday sermon.  Mary Dyer was hung on the Boston Commons for supporting her close friend, Ann Hutchinson.

1775 ~ Deborah Champion, dressed in disguise, delivers a message to George Washington in Boston, and continues to serve during the Revolutionary War.

1798 ~ 189 Missionaries were sent to North America (Ohio, New York, Pennsylvania).  Missionary Society of CT is founded. [CTWUCC would welcome  participants to the 189th Annual Meeting of the United Church Board of World Ministries and extend the “right hand of fellowship” to members of the Christian Church (Disciples of Christ) Division of Overseas Ministries as the CT Conference celebrated its 200th Anniversary in 1998.]

1810 ~ Establishment, in Farmington, CT, on September 5th, of the American Board of Commissioners of Foreign Missions as a result of the petition by four of the “Haystack” five theology students’ missionary zeal for foreign lands to the General Association of Congregational Ministers of Massachusetts.  The first eight missionaries were commissioned and sent to Calcutta, India in 1812.

1833 ~ Prudence Crandall opens a school for ladies studies in Canterbury, CT,  admitting one black child, which caused a tempest and  the withdrawal of all whites. She replaced them with blacks, for which the town fathers brought her to trial, thus, “shaming” her. Her well was polluted and her house destroyed by a mob, causing her to close the school and flee west.  Canterbury eventually became a center for anti-slavery advocates.

1867 ~ Women’s Board of Missions formed in Boston to collect funds for native women to learn to be Bible readers.  Their philosophy was to “train the natives (in India), resign and turn the work over to them.” ~ a novel idea!

was credited as an instrumental force in freeing the slaves, and about whom Abraham Lincoln was heard to ask:” Is that the little lady who started the big war?” Indeed, as rumors of civil war circulated, women began to organize and speak out (and men began to listen!).

1871 ~ The Sisterhood of Churches of New Haven gave $ 800 to Margaret Edwards for her work in Africa.  [Other women would later go to Asia & Africa.  In 1915, Dr. Katie Wilcox from Chester, CT went to S. India to build a college for Indian women, spending 20 years in that ministry.]

1875-79 ~Women’s Societies began to knit and sew to support the needs of soldiers during the Civil War, and worked in the stench of the hospitals nursing and caring for the sick and wounded sons and fathers.

1889 ~ only four female Congregational ministers listed in Congregational yearbook. By 1899, # 49 females; 1910, # 89; 1920, # 109. Worth noting: the first Hawaiian female was ordained in 1925: “Mother Alice” Rosechill Kahokuoluna was the first woman of Hawaiian descent and therefore the first woman in the Pacific Islander and Asian American (PAAM) community to be ordained to ministry.

1926 ~ After several years of study and conferences, the American Board of Commissioners for Foreign Missions (ABCFM), founded in 1810, and the Women’s Board of Missions (WBM), founded in 1868, effected a merger (12/31/26), resulting in ABCFM becoming the one Congregational Board for missionary work.

1928 ~ October 2nd, the Council of Congregational Women of CT, recognizing that Home & Foreign Missions are One, organizes to consolidate four former mission-oriented organizations:

Women’s Board of Mission, Hartford Branch (1874)

Amy Ogden Welcher is recording secretary for the Council and becomes its first President.  She commented that “Whites were not allowed (by the men) to go into black churches.” They pledged to continue the work of the four “Districts” across the state.

1941 -1945 ~ During and just after WW II, women’s groups focused on having local speakers from the area to conserve on tires. Board members were defense workers and not as available, and women were busy making bandages for the Red Cross.

1942 ~ “The Council of Congregational-Christian Women supports a’ loan” library, with women from all the Districts reading thousands of book each year, and this year, by adding an art library for use in church schools, young people’s groups and worship centers. Mission boxes, clothing, and school supplies, etc. were sent to N. Carolina, Louisiana, and overseas.  Missionaries were commissioned for work in various African posts and supported financially during the year. Money from the Mary Twichell Blakely Fund makes a yearly donation to Mt Selinda, Africa, Nurses Training School.”

1950 ~ #3 Mary Edith “Tinker” Williams who with her husband Philip, will become a missionary in Japan; and in

1955 ~ In CT, a special committee was set up to disburse monies given by CT Women to churches in the Housatonic Valley flooded by Hurricane Diane.            Pg 3

1956 ~ Discussion began on Women’s Fellowship having an office secretary.

“The first thing that happened was a new appreciation for lay leadership. When the new UCC Constitution was completed in 1961, it called for a single national instrumentality to support all UCC laity –a Council for Lay life and Work( CLLW), for the purpose of “assist(ing) all men and women in the churches to grow to full stature as mature Christians; to develop and coordinate programs to deepen and strengthen their Christian witness; and to help (both) understand and participate in the whole task of the church.”

1963 ~ Helen Huntington Smith became the executive of CLLW, thus becoming the first lay person and first woman to head a national instrumentality in the UCC.

[1963 was also the year that Betty Friedan published her book: The Feminine Mystique, which, along with other writers of the time, help American women begin questioning prevailing attitudes about women in our society.]

1971 ~ General Synod of the UCC passed a Pronouncement on the Status of Women in Church and Society: “God’s love for all (his) children makes no distinction of worth between male and female.  They are equal in God’s sight; therefore, distinctions made by society which assume an inferior-superior relationship are contrary to the will of God.”

The creation of a Task Force on Women in Church on Society (TFWCS) associated with that action led to the publishing of COMMON LOT in 1972, and in 1973, to establishment of the Antoinette Brown Award, to honor two outstanding ordained women at each General Synod. Louise Wallace , a lay woman active in the Kansas Oklahoma Conference and deeply involved with Church Women United, was Co-chair of the TFWCS, had the idea for the Antoinette Brown Award and designed the medallion given to recipients.

The resultant transformation to becoming The Coordinating Center for Women that took place from 1971 to 1987 dramatically changed the place and leadership of women in the UCC.

1974 ~ First African American woman ordained: Yvonne Delk, in Virginia, first to  head a national instrumentality (the Office for Church in Society) in the UCC.

1979 ~ Marilyn Breitling, first executive for the newly formed Coordinating Center for Women, continuing in that position until 1991.

1987 ~ CT women engage in the activism of the California “Grape Boycott” as well as the Nestle and American Home products buying boycotts.

1998 ~ Women were taking a real part in church and society in leadership positions as The Missionary Society of CT marked 200 years (1798-1998) and celebrated the 189th Annual Meeting of the United Church Board of World Ministries and extended “the right hand of fellowship” to the members of the Christian Church (Disciples of Christ), by hosting  the meeting AND presenting the play “To Catch the Connecting Cord,”  a history of CT  Women, 1928-1998, written by Betsy Work.

~ CTWUCC logo was designed by the Rev. Linda Higgins, a member of the Worship team. The outline of the Charter Oak tree encompasses three icons each one representing an aspect of the way the work of CT Women is organized: “Come to Worship, Stay to Study, Go to Serve”, and was inspired by I Corinthians 3:6 where Paul writes that “…God gives the growth…”

The Huguenot Cross became a symbol of service for Board members, with the President receiving an enameled, gold colored one.

2001 ~ At the suggestion of Loralee Huston, CTWUCC begin the practice of honoring lay women in CT’s local UCC churches (nominated by their church) with a Service of Recognition at each Annual Gathering. In addition to a certificate, awardees are given corsages, a group photo taken, biographical information is printed in materials for the day, and they are luncheon guests (sponsored by their church).

Mission Projects in the years 2001- 2015 included the following:

2015  CT Women of the UCC continues to “Gather for Worship, Stay to Study, Go to Serve “  in multiple ways:

Planning and providing a Winter Retreat for Women Clergy during UCC Women’s Week;

calling all UCC Women in the State for an Annual Gathering for worship, study of issues of concern to women, and celebration of the many gifts of women in service to their local communities; and inviting all women to an annual Day Apart.

In addition, CTWUCC continues to receive Campbell’s Labels and Kellogg’s Labels for Education in support of Elon Homes & Schools for Children in Elon, N. C. (one of our CT Conference partners); encourage participation in the Interfaith Sewing and Service group (which has been multi-church and inter-faith in participants since January, 1994, and international in its scope by sewing school bags and baby kits quilts,  baptismal gowns, and “walker bags” & bibs, among other things); support the CT Korean Partnership by hosting four women from Korea, enabling them to attend the New England Women’s Celebration; support Church World Service (especially  “Crop Walks”, disaster relief “kits”, and “blanket” drives); participate in the planning and attendance at New England Women’s Celebrations; and encourage participation in Church Women United.

2018 Historic CT Conference begins a time of discernment on joining together with the historic Massachusetts and Rhode Island Conferences.

2019 – CTWUCC began a two year time of reflection and prayer to honor their history and develop a plan for moving forward into the new Conference.